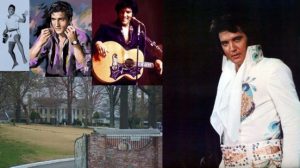 By: Jack Dennis AXS Contributor Oct 28, 2015
Elvis Presley is ranked #2 on the top list of high earning deceased celebrities for 2015.
Graphic by Jack Dennis, Photos courtesy of Jack Dennis and Texas Elvis Fan Club archives
Decades after the death of Elvis Presley, America’s greatest music legend’s legacy remains strong with the King placing extremely high on Forbes’ new list of “Top-Earning Dead Celebrities of 2015.”
The release of another commemorative stamp, new albums, international recognition and new generations of Presley fans are key indicators as to why Presley earned $55 million in pre-tax earnings between Oct. 1, 2014, and Oct. 1, 2015. Forbes has him listed in the #2 spot on their top ten chart.
Besides the stamps, music, merchandise and movies, the Presley estate brings in a considerable amount of revenue from Graceland, the late singer’s mansion in Memphis, Tennessee. Last month, Jack Soden, the President and CEO of Elvis Presley Enterprises met with residents of the Whitehaven community to shared proposed plans to enhance the neighbourhood.
“Here is really, basically the reason people come here from 170 countries a year, from every corner of the earth,” Soden said, motioning to the direction of the Graceland mansion, from the Elvis Presley Car Museum across the street. “That’s never going to change. That’s the heart and soul of this whole thing.”
A preview of the revitalization of the west side of Elvis Presley Blvd., presented in blue prints and diagrams by Soden, included “state-of-the-art” facilities comprised of two restaurants, a soundstage, retail shops, and more parking.
“I am excited about the two new museums,” said Mark Griffen. “One will be a modern Elvis car museum and the other will be about Elvis, the Entertainer. Updating this region is long overdue and it all begins with the Graceland area.”
“This is our opportunity to take what we have welcomed and served 19 million visitors with and do something better,” CEO Jack Soden stated, also indicating Elvis’s jumpsuits, gold records, guitars and other memorabilia would be prominently displayed in the “Elvis the Entertainer” museum.
Elvis Presley Enterprises built an archives building that opened in 2015 and expect the new 450-room resort hotel Guest House at Graceland to hold a grand opening on Oct. 27, 2016. On that date the Heartbreak Hotel will be officially closed to make room for needed tourism parking near the intersection of Elvis Presley Blvd. and Craft street.
Graceland sits on the original 13.8 acre estate Presley purchased in 1957 for a sum of $100,000. Soden, Priscilla Presley, and Elvis’ Aunt Briggs cut the ribbon for opening the home to the public as a museum on June 7, 1982. On Nov. 7, 1991, Graceland was listed in the National Register of Historic Places and declared a National Historic Landmark on March 27, 2006.