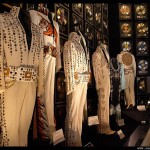 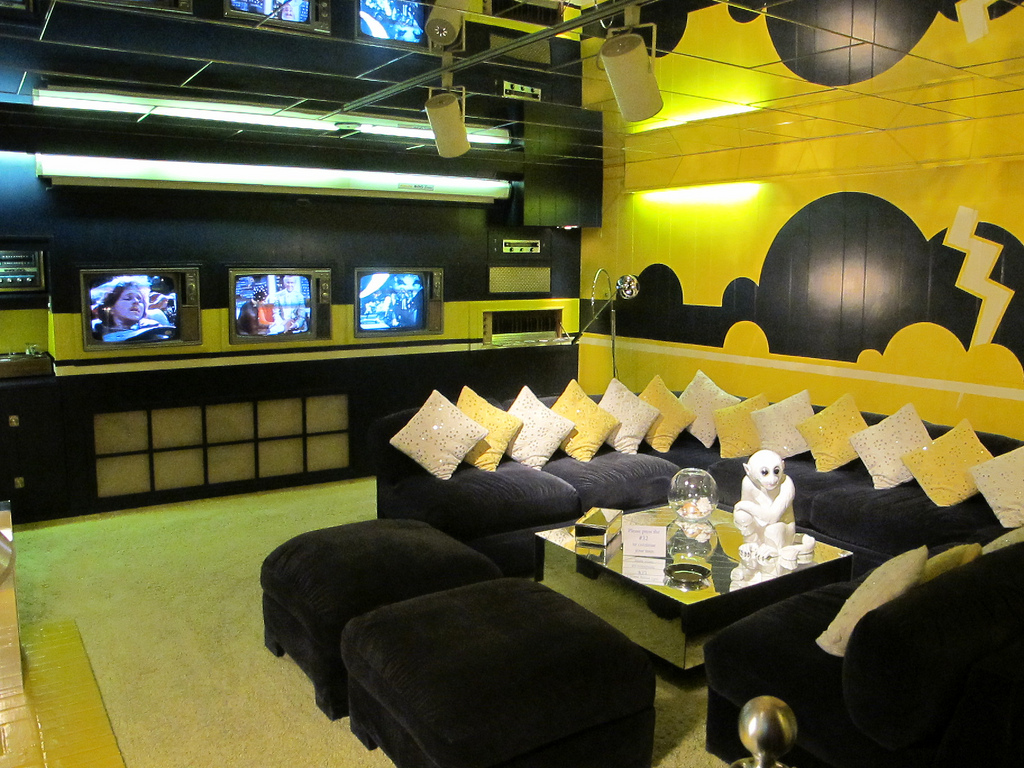 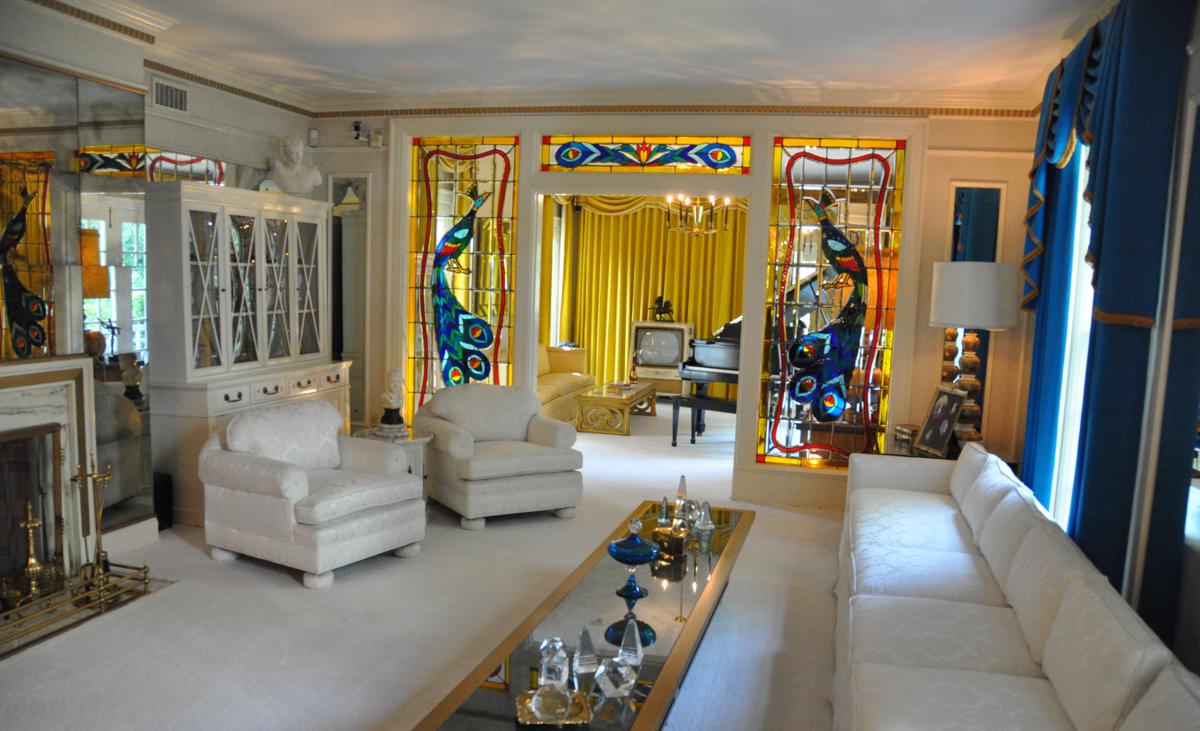 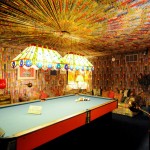 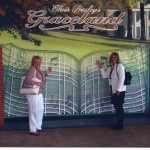 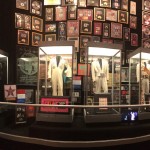 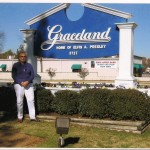 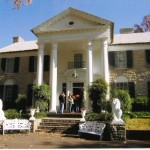 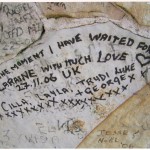 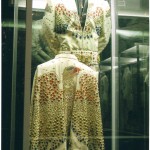 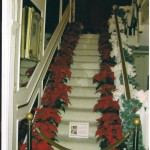 After 30 yra.This staircase to Elvis\' Bedroom is still Private 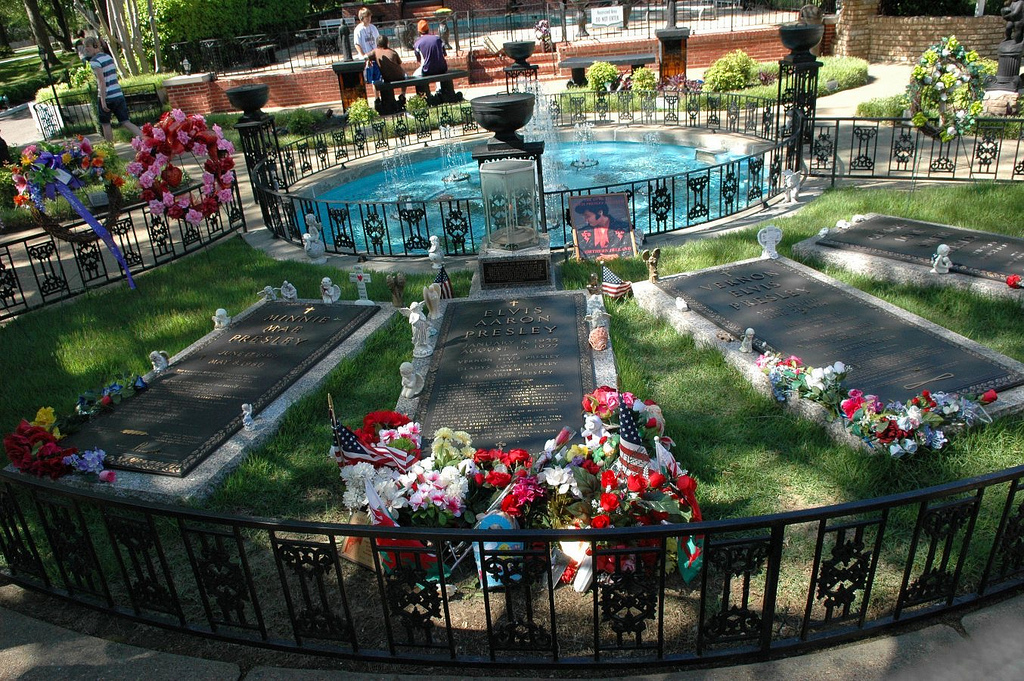 My sister and I arrived at the Heartbreak Hotel the day of Thanksgiving, the Hotel was designed and styled in the style of the early 60’s. It was just fabulous.  We checked in at reception and we were told that our room was on the first floor. So taking our suitcases, we entered the lift, pressed the button for first floor, and within seconds we were on the first floor, doors opened, unloaded our suitcases, and didn’t realized that the floor we were on was the first floor so we hadn’t actually moved. We both just started to laugh,  it was really funny at the time. Anyway we found our bedroom with two enormous double beds in the room. It was crazy.  By the way, the last few days of my Birthday treat, the Hotel offered me The Gold & Platinum Suite, how cool was that, I couldn’t say no thank you, could I, I was so pleased. The Gold & Platinum Suite has a crisp '50s/'60s retro decor and an overall theme inspired by Elvis' unparalleled recording achievements.

After taking a shower and changing we went down to the foyer to ask where were could get something to eat.  Before we knew it the receptionist had arranged for the ‘Pink Cadillac’ to take us to Marlow’s, one of Elvis’ favourite Restaurants.  I had no idea that Elvis owned several pink Cadillacs, but it didn't surprise me that Marlowe's is an Elvis-themed restaurant. Elvis everywhere, even under the glass top tables were newspaper cuttings from back in the early days of Elvis’ life.  It was just fabulous, so much food, we could hardly move. Thank goodness the Cadillac returned us to the hotel, there was no way we could walk home.

Next morning we were both up early to walk over to Graceland. We were so excited I was filling up before I even got to the famous Gates. But just walking along the beautiful stone wall it felt something so special.  We decided to visit the Museum and the Lisa Marie Aeroplane during that day, The Lisa Marie was in immaculate condition, still original seats, bathroom, washbasin, tables, seating all in the 50’s  style, all covered in plastic. We walk along the Boulevard and then in the evening, we went to downtown Memphis and Beale Street.

The Heartbreak Hotel arranged for a tour guide to take my sister and I to Tupelo where Elvis was born, which was really interesting.  Especially interesting was meeting the lady Juanita Robison  who was still alive, bless her, and is still looking after the little Presley home and the Elvis Museum.  A must for any Elvis fan is the Tupelo Hardware Store. This is the store where Elvis (well, his mother) bought his first guitar. There is an "X" on the floor that marks where they stood.  Lawhon Elementary School, the first school Elvis attended and Milam Jr. High, the last school Elvis attended before moving to Memphis & Jonnie’s Drive-in, where Elvis shared priceless moments with his friend James Ausborn while enjoying a cheese-burger and Cola.   Our guide also took us to the Mississippi-Alabama Fair where Elvis returned to Tupelo to perform two shows at the Mississippi-Alabama Fair and Dairy Show on September 26, 1956.

When we returned that afternoon to the Heartbreak Hotel, everyone in the Bar knew it was my birthday.  How? Because my lovely Cousin from Hamilton Ontairo, Canada, had driven all the way down to Memphis to be with me on this special occasion, bless her. I was so excited to see her, and she stayed the whole week with us.  She was not an Elvis Fan, but by the time we left Memphis I can assure you she was.

Our nights were spent on Beale Street which was amazing with all the music, little coloured men with their Pianos out on the street, playing piano, trumpets music coming from every nook and cranny, you really didn’t know where to look next.  BB King’s Club was fabulous. Listening to the blues, being able to dance, it was great. Behind the bar counters were long white sinks filled with ice and little jam jars in which were served the drinks, ice cold. People we so friendly, we ate in some basic down to earth Restaurants, but it was all good food. Blue City Café, Pig on Beale, Flynn ‘s Restaurant & Bar, Rumboogie  Cafe and The Hard Rock Café.  Hard Rock Café, was great, all based on Elvis, and the waitress and waiter, were great on serving, but when the music started, they would start dancing all around the Café. It was really great.   Loads and loads of Souvenir Shops… all Elvis.  Elvis, Elvis  Everywhere. I loved it.  I was in my element.

Saturday was the day, to visit Graceland and we paid a little extra to have the Special V.I.P.Tour. The mini bus picked us up from the Hotel drove across the road to Graceland, I was so nervous, but excited and emotional.  I was filling up before I even went inside the Mansion. My sister, bless her, was telling me to keep calm, but my emotions were just building up, there was nothing I could do. We had the earphones placed on our heads, but on entering the Mansion there was a feeling of Elvis’ presence.

Graceland, has the look and feel of the late 1960s to early 1970s. Your first stop inside Graceland Mansion will be the foyer where you can view Elvis' living room, dining room, the stairways and his mother's bedroom. The upstairs of Graceland Mansion is off limits. Many celebrities, and even Presidents have asked to see upstairs, but the answer has always been sorry but No. For 35 years Elvis’s Private Bedroom has been kept a secret.  Next you will travel through Elvis' kitchen to his downstairs area which includes the TV room and pool room, and the famous jungle room.  There is so much to see in this wonderful Mansion. The rooms housing Elvis' trophies and his amazing collection of gold and platinum records, all his fantastic Costumes that he wore on stage, Lisa Marie’s baby cot and clothing are all there. The rooms just go on and on.

Finally we arrived at the Memorial Garden, where I had to prepare myself.  I had to walk through there when I was completely ready, I was so emotional and was getting into quite a state. My sister had to try to calm me down with slow breathing, it was really something so, so special. The memorial garden was so peaceful.   There is a special period of time for free-admission walk-up visits to the Meditation Garden at Graceland, where the grave sites of Elvis and members of his family are located. My sister and I went every morning before Breakfast.   I was told by one of the official Staff of the EPE that every gift that was left on Elvis grave was kept and preserve in the huge store places that house all Elvis’s memorabilia.

I was lucky enough to do all the things that I wanted to do while in Memphis. I even visited SUN Studios where I recorded a CD Love me Tender, along with my sister.

You must all remember on the ’68 Special when Elvis sat down on the steps at the side of the stage, and sang ‘MEMORIES’ to all those ladies. Well, I was lucky enough to have a Video produced with Elvis singing ‘Memories’ just to me! How cool is that?  This was produced by a guy who worked for Graceland, the clever way he produced it was with something called the green cloth, I had to pretend that Elvis was sitting by me and to imagine he was singing ‘ Memories’ just to me, which I can assure you all was not difficult to do, I had to smile at this imaginary Elvis, blow him a kiss, which I felt a bit silly because there was only this guy and myself in the room anyway, I was thrilled to bits with the video when it was completed.  I had a duplicate done in case the original was damaged.

We also spent an Evening on the Mississippi Queen 111 with its Diner, Dancing to a great R&B Band and eating Mississippi Mud Pie.

It was a very sad day when we were leaving Graceland and Memphis, my sister and I had time to visit Elvis’ Grave once more before we left the Heartbreak Hotel.

THESE MEMORIES I WILL NEVER FORGET.