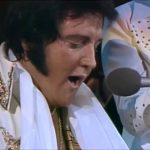 Mere weeks before his ascent to a better place a video camera recorded Elvis Presley The film is gut- wrenching lay painful to watch but I do over and over and over again. The camera’s focus is on the face: bloated yet beautiful, eyes heavy-lidded, moist, stinging, a sliver of sparkle still evident. There is a struggle being waged with demons both emotional and physical. The demons are winning. And the voice! When attempting to verbalize an introduction to the song it is tired, tentative, timid, but when moved to sing it is powerful…”oh my love, my darling I’ve hungered for your touch”…..passionate…”lonely rivers flow to the sea, to the sea, to the open arms of the sea” … pleading…”time goes by so slowly and time can do so much.. are you still mine?” It reaches up from some warm, safe place deep, deep in Elvis’ soul and grabs my attention in a strangle hold. It does not let go. I am breathless. The voice misleads Elvis into believing: “As long as I can do this I’ll be alright.”  I embrace this misconception also. Elvis gives more than he should and it haunts me as he loses himself in the depths of his evaporating life. “Unchained Melody” as I see it. as he slowly walked toward a piano to sit and sing to a sold-out arena. 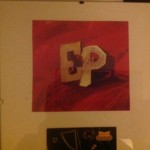 DETROIT, MICHIGAN APRIL 22, 1977
I had seen Elvis a few times in concert without ever thinking of giving him a gift. This time was different. I asked a jeweller friend of mine to create a gold initial ring for me and I took it to the Detroit Olympia and was hoping somehow to give it to Elvis.
My seat was in a different state…far, far from the stage. Before the show began i got as close as I could to the front of the stage and saw J.D. and Kathy Westmoreland talking to some fans. I mentioned her over and asked if she could give my gift to Elvis.
She assured me she would. A few months later Elvis was gone and I was never sure if he got the ring until a couple of years after Graceland opened to the public and a friend of mine was there and saw it in a display case with some other stage jewellery including . the TCB ring. I was so happy !!!!
At last I knew that Elvis had received my personal thank you for years of joyous entertainment. Some years later my wife and I went to Graceland and I saw the ring again so many years after that special evening in Detroit.
forgot to mention that I tried for several years to contact Kathy and finally did thru a fan club …she asked my permission to put the story on her web page so I am assuming she did. I am not too sure she actually remembered the event though.

I am not really computer literate but I will get my wife to do it. Actually if you check out the DVD “Elvis By The Presleys” in the chapter Style, the ring is there on a red background. That really freaked me out. I wrote to EPE and explained the whole story because I wanted my jeweller friend to get credit for making the piece but that never happened. I did get a letter back thanking me for explaining the ring but that was it. I often wonder whatever happened to the note that I had included with the ring when I gave it to Kathy Westmoreland. My jeweller friend has passed away and my friend who went with me to the concert is untraceable as is my friend who saw the ring at Graceland. I really can’t verify the story but in my heart I am proud. I am not sure if Larry Geller would remember that night if he was there.

I am looking to acquire Concert Photos from Houston 1970 March … my first Elvis Show. 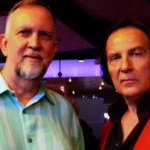 Carlo Martini is a multi-talented singer has been an Elvis Presley fan since a young child,  watching the Elvis Movies  sparked a lifelong admiration. Was born  in San Remo Italy.  Carlo’s has performed his Elvis show in many destinations across Europe’s Mediterranean including Italy, Germany, France Australia. in the  late 70s and 80s 90s

His vocals are the closest to Elvis you will ever hear!  Carlo has the magnetism, appearance, and voice to bring back all the memories from the 60’s, and 70’s when Elvis performed.

A Tribute to the King!  ” Its a privilege to Entertain the greatest Fans in the world … Elvis fans”!

I met Elvis when I was little boy during his stay in Germany. I lived in Italy at the time, but my cousin and family had some relations of ours living in Germany, who were from Italy. my cousin Rogero was a big Elvis fan, me and Mom and Rogero took the train to Germany  where I first met Elvis at the Army post, that was my first experience There is more to my story.

On the 13th February, 1977,at the Sheraton Hotel, West Palm Beach, I presented a Plaque to Elvis, and to this day it is displayed at the Hotel along with other gifts.  Elvis rented the entire Hotel. It took a little while before I was able to give this gift to Elvis, because there were many Fans and Photographers, and I was determined to get this Plaque to Elvis, so I decided to knock on every room ext. downstairs and Bingo Joe answered the door, I did ask Joe if I could see Elvis, to give him this gift, but Joe said that it was not possible now because he was dressing for the Concert, but Joe said that he would give it to Elvis and thanked me.  However I still wasn’t happy because I wanted to make sure Elvis received it.  I called another Ext., and Sam Thompson, Elvis’ Bodyguard, said to me, were you the Guy who gave Elvis this gift, I said “yes I was”, and then Sam said that Elvis Like it very much and sent his best regards and thanks for your Friendship.  I was so happy he received it.

The years before when I visited Graceland, I became friends with Elvis’ family, Harold & Vaster, his Uncles, Aunt Loraine Smith, she adopted  me, … and still today I visit Graceland and Vernon ‘s home where it brings back memories of my visits back then and the friendship I had with the family……….

Carlo was born in Sanremo Italy located on the Riviera. In Italy His Mother Nina was Seamstress on the side and House wife ,His Father Settimo was Farmer and mason The Village of Apricale
Carlo pursued Acting, Singing at age 8 His first Appearance on National Italian Television talent show for Children’s the ”Zecchino Doro”.
In the early 60’s He made his film debut as extra on ‘Hercules’ films in Cinecitta’ studios in Rome.
Study Drama at School Theatre in New York City, Palm Beach Jr College in the late 70s

Appeared in Plays such as Camelot, How to Succeed in Business Without really trying , Fiddler on the Roof, Chorus Line ,and Dracula and Opera De Monte-Carlo in Norma.

Carlo’s caught the attention of the producers Director Mr. Dino and Aurelio De Laurentii, Director Carlo Venzina , since then his credits have included on Laurentii Film productions in 1987 ” Monte Carlo Gran Casino” He can also be seen opposite with Italian Celebrity ‘ Christian De’ Sica Son of the late (Vittorio De Sica) and Comedian Actor Massimo Boldi, In 1988 appearance in “Dirty Rotten Scoundrels” with Michael Caine and Steve Martin , Filmed on the Cote D’ Azur in France , 2007 Mr. Bean Holiday, in 2002 , ” Gangs of New York” as (non credited extra) .

He continues to appear in films and Television He makes fairly frequent appearances at film festivals.
Winner of Italian Poetry 2006 Representing Italian American.
Carlo’s as portrayed character roles such as in Western, Mobster, Action film, Comedy

recently written a Book is out today on his career, life story & Celebrity friends is out on Amazon , Barnes Noble ‘ The Journey of Carlo Martini